In learning to live with a serious mental condition, not only am I undergoing severe— if not pathological— nostalgia, some memories make the situation even more serious. How serious? Well, one recollection got me thinking about miracles.

On the road recently and heading for St. Louis, one of the more severe strokes of nostalgia struck as I recalled the first trip taken there in 1967. I was returning to a teaching gig in DeKalb, Illinois. Starting out in California, it didn’t seem foolish to take my English roadster (a Triumph TR4 with canvas top) cross-country in December, just cold. But as a ferocious storm en route covered the West, judgment of that decision turned to downright stupid, caught as I was threading icy lanes punched through roadside snow banks piled higher than the trucks passing.

Fortunately, I found a warm place for the night and the next morning the TR was again cutting across a wide open Midwestern plain now completely covered with snow. Definitely a white Christmas. In fact, it was Christmas. Seeing I was close to St. Louis and saying to myself, How about some Christmas music— dialing the radio— Maybe they’ll give me some Bach. Maybe the “Magnifcat.” That selection should be a cinch on the open plains of the Midwest. Ha! 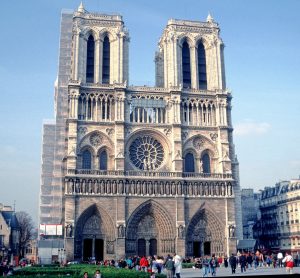 As you probably guessed by the smirk in the voice that that was exactly what came on the radio. “The Magnificat” by Johan Sebastian Bach, live from St. Louis Cathedral.

OK, coincidence. But even as such, you gotta admit, a wild one. It’s at the top of my list of koinkidinks.

This was at a time when not all Christmas music was the jingle jangle it is today. All kinds of religious carols and music were played. But this wasn’t an old chestnut like Handel’s Messiah, which is almost as common as Jingle Bells. This was a baroque hymn to the Virgin traced back to the earliest days of Christianity until Bach turned it into just what it is named: Magnificence. Not for the hit parade. Hard to remember ever hearing The Magnificat at Christmas-time, before or since. On the other hand, reflecting upon that moment today, it occurs to me that there was a Musical Heritage Society recording of it. So you could say it was in the mind of the public who subscribed to it. That’s how I first heard it. Classic music has its fads as well. So the selection was relatively pop.

But there remains one detail of the incident that still has me shaking my head. This was the detail, to my mind, which put the whole thing into the realm of awesome. And I mean truly “awesome.” Unlike folks who may apply the word in describing a trifle like a Twinkie, awesome began as a word attempting to express the inexpressible so that the mouth gapes open in wonder and can only say:

Awe! Like a singer singing a high note in the Magnificat.

But the detail I found to make this particular koinkidink truly awesome was the moment I punched the radio dial button. It was one of those tiny tube radios stuck in the middle of the dashboard. The speakers, though, were surprisingly good to be heard over the windrush against canvas. So when I punched the button, the first audible thing was the shuffling of noises in a large auditorium (I thought auditorium) just before everyone settled down. It seems my impulse to tune in at random came a couple of breaths just before the downbeat. Then orchestra and chorus in the cathedral went to work on the awesome.

That’s the detail that still has my head shaking. I got the urge to dial at the precise beginning. So it brings up a curiosity, if not a question: At what point does a super-wild koinkidink turn into a miracle? Not a big miracle. No lives were saved with this miracle. It was just my little pint-sized personal miracle, a stroke of nostalgia I wished to share on this day.

Only on this Christmas day I’m writing not necessarily as a believer in miracles. I don’t care about a star over Bethlehem other than the story it makes. More miraculous to me is twelve year-old Christ holding forth with the rabbis in the temple. Miracles are not required for my admiration. I’m with Nietzsche when he points out that even without the miracles, Christ is still Christ.

Christ was the one who presented the notion of Charity to people brave enough to defend it. He paid the price of self-achieved submission, which is how Joseph Campbell described the crucifixion. The birth of Christ was the birth of caritas, according to St. Paul, the practice of charity in the order of agape or God’s love for man, all men and women. It’s the touch reaching out to Adam’s hand that

Michelangelo painted on the ceiling. Above that Vatican ceiling stretches universal blue, the ceiling to our knowledge. However, above the blue is beyond our ultimate knowledge. As the poet William Stafford reminds: The darkness around us is deep.

No, I don’t require miracles. I’m satisfied with happy coincidences. But if folks acted with greater respect for each other, which is what the Christmas season should inspire, and if they stifled their willful ignorance, beginning with the nonsense crucifying our congress, it would seem like a miracle had just occurred.