☞ So many different and opposing— let alone ridiculous— takes on the current pandemonium call out for comment. First off, “pandemonium” is the better label than “pandemic,” which only refers to a mass infection. Pandemonium translates literally as “all demon action,” and that’s the scale of the many who’re busy causing an infection of mass stupidity on top of the Kung Flu.

In light of the pandemonium, corona virus seems the least (if you’d call it that) of the problems caused by the newly manufactured infection traveling world wide. That’s why the Swahili word for virus is chosen here, vinidogodogo. Since the Africans didn’t have a word for virus, they referred to it as a “small thing.” And a virus is indeed a small thing. It’s so small that it leaves all kinds of room for conjecture. And that spurs a free-for-all opportunity of confusion when the demons show themselves.

☞ Of the current phantasmagoria spawning new rules every day, one bit of blather speaks volumes over the rest of the confusion. That would be the great hydroxychloroquine debate. Usage of that drug for partial treatment appears to have been widely used since the outset, and there’s a reason for it. Chloroquine had been used for decades past in the treatment of malaria. So when this newly invented virus spread throughout the world, it was noted that the typically malaria-ridden countries were somewhat spared.

A passage from Laurie Garrett’s book The Coming Plague (a bible on the subject of disease) described a visit by a CDC team to an outpost clinic in Kagera, Tanzania, which indicated how widespread the drug was applied: “The first stop on the torturous, muddy drive was the Bunazi Rural Clinic… The chief medical assistant gave a tour, anointing each concrete hole with an illustrious title, such as “pediatric ward” or “maternity ward.” But few rooms had beds, there was no surgical theater, and the pharmacy had little more than chloroquine and aspirin. (p 341)  So the only medication other than aspirin was cholorquine, and with good reason. The drug was used successfully for decades to ward off malaria. So it would be the one thing even on a shelf in a barren outback clinic in northern Tanzania.

When the data showing for Wuhan Flu in those countries of usage was very slight, the assumption would be natural that chloroquine (or a compound thereof) had something to do with it. Thus the private experimentation began. And further data showed that hydroxycholoroquine was most effective as a prophylaxis, which would account for its being most effective at the outset of the infection.

☞ But we’ll really never know the truth about that particular drug, or any other particular in the present scheme of madness. According to the PEP rule, that is, Pandemic Equals Pandemonium, every demon was put on alert. And to compound the madness, President Trump gave somewhat of an endorsement to hydroxychloroquine— not just the kiss of death for anything Trump favors, but for this one a big sloppy wet smooch of death.

☞ An African doctor recently appeared on the steps of the Supreme Court Building. Allied with a group of colleagues, she made her formal public appeal (much like a peaceful protest) on behalf of the drug. But those efforts were minimized. Seems odd that a Nigerian— and female to boot— would be minimized these days, here in this country where her life really matters. Furthermore, being from Africa, she may possess some extra insight into hydroxychloroquine. But no…

☞ Every home town is stocked with cool guys. And there are the younger guys outside the periphery of coolness who want to get inside. They ape the manner and dress of the cool guys, who referred to those lesser uncool mortals in my home town as “junior flips.” Such is how individuals like Mark Zuckerberg are thought of here at 3T. Markie wants so much to be one of the cool guys he even made a nudge of jerk of a nod at the idea of running for president. But he’ll always be a junior flip. 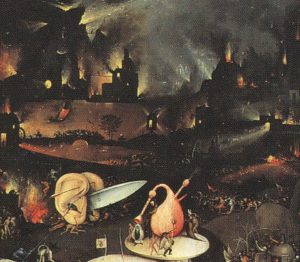 What could make a pandemonium hotter than a pandemic in an election year? Gadzooks! It’s the Apocalypse playing out on the street. You’d think Hieronymous Bosch was stage director. And to give it a Mardi Gras effect, you have the algo-rhythm boys and girls pulling information on subjects deemed in their cool circles as morality unfit. Such was the fate of hydroxychloroquine. The all-knowing Twit Googler Code Board of Junior Flips decided that knowledge of a potential aid in a plague is detrimental to the health of their doodlers, especially after that foul substance was endorsed by their own personal paranoid Beelzebub president.

☞ [Nota Bene: “Twit” should not be taken especially as a judgment call. We let the reader decide. We do, however, regret how twitter gives bird calls a bad name. But, be that as it may, the gossip industry sanctifies these mouth pieces of trillion dollar enterprise, these thinkers deciding which news shall be reported so that the doodler receives in his doodle box up-to-the-minute reports of how he said that she said how he said but later denied the report showing evidence that he put his hand there but nonsense her lawyer rebutted with a later inside report on polls trending otherwise— twitter, toot, tweet, and so goes the news. And Mr. And Mrs. America, that’ll be a trillion dollar bill.]

☞ But any further report of hydroxychloroquine will be suppressed by Mr. Flip and the Algo Rhythm Kings. It has even been reported that Director Dr. Anthony Fauci of CDC holds an interest in one of the vaccines in development stage as we write. Furthermore, the way Dr. Fauci goes along with the junior flips— who say riots in the streets good but hydroxychloroquine for vinidodogo bad— makes his collusion with the algo-rhythm kings look likely. And it might be worth considering how a cheap hydroxycholoroquine would be real competition for the new vaccine. We’ll never know for sure, but we’re just taking the advice of Deep Throat and following the money. In this case, the vinidogodogo vaccine money. 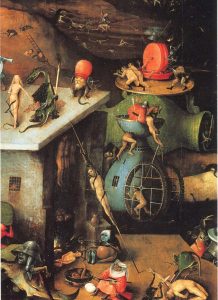 ☞ Meanwhile, as the vinidogodogo goes viral, public nonsense goes even more viral, everyone contributing to the confusion. With selfish acts of suppression executed by the Junior Flip judges of morality, it’s obvious they have no problem selling out their nation’s interests to the highest bidder. They may be surprised in the end because the Chinese will grind them up for their egg rolls as they have done before with the long line of business saps lured to those markets since the Boxer Rebellion at the beginning of the last century. But equally disappointing is the populace at large, cowering in their cells. Vinidogodogo in their cells, John Q family in theirs. Not only do they cower. They give credence, commerce, and obeisance to the junior flip enterprise. They contribute to its numbers, and therefore its massive control.

☞ So it’s not hard to conjecture why there has been little resistance to The Resistance, not with the underlying massive public mind control in power. A few business owners defy the local regime, and not much else. But whatever the reason for self-restraint, it should be vigorously noted that no one is safe from pandemonium. Demons lurk everywhere, vinidogodogo in every corner. Locked doors are no guarantee. It’s handy here to remember the folks in the French countryside who thought they were safe from the Jacobean Reign of Terror madness in Paris until the guillotine came rolling into their own city square. 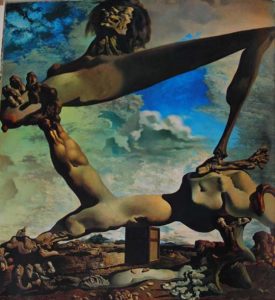 ☞ It’s always been a source of personal wonder how some heroic individuals of this country— distinguishing themselves in battle and commerce and invention and enterprise— emerge out of the jelly that constitutes the plastic mass clogging the freeway. In Ralph Ellison’s novel Invisible Man, a preacher speaks his refrain: “We are a slow-to-movin people,” he tells his black congregation. But things don’t seem that way anymore. Black people, along with their white counterparts wreaking and wrecking, are in perpetual frenzy, unleashing their hatred on a glass window or cop car— if a republican isn’t handy. Role reversal has taken hold. If any group is slow-to-movin, it would be those who passively countenance such pandemonium. And the paralysis sends a cold wave through neighborhoods, past the mayor’s office, around the governor’s mansion, and settles at the door of Congress. And the solution? Lie down, and, in some cases, literally kiss feet.

☞   But gawking passivity is not a new vinidogodogo. Certainly not from the Twenties of a hundred years ago when H.L. Mencken made his observation that “the American people, taking one with another, constitute the most timorous, sniveling, poltroonish, ignominious mob of serfs and goose-steppers ever gathered under one flag in Christendom since the end of the Middle Ages, and they grow more timorous, more sniveling, more poltroonish, more ignominious every day.”

☞   Nota: If you don’t happen to know the meaning of those qualifiers Mencken used— timorous, etc— all you really need to understand is that they can be mostly translated as the runny yellow stuff that drops out of the bottom of barnyard fowls.