Jawbone Connected To the Assbone 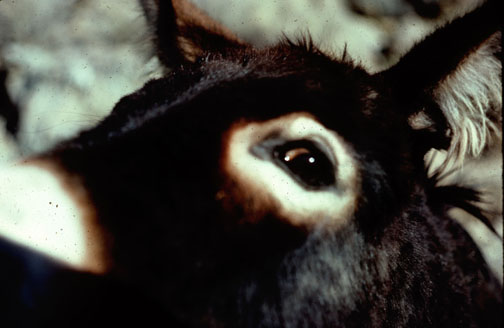 Jawbone Connected To the Assbone

Sweet as Bible stories can be to passionate youth is the bitterness felt by the cruel remarks when callow playmates mock that passion. Both bitter and sweet, then, would be the tales told of Miriam and Saul and Ruth. The more to press upon friends and associates a sincere glory in David and Abraham, the more to be scoffed. Oh, so sweet, yes. Yet oh, so bitter. It is thus in the shadow of those memories is the wish to share now— with the greatest enthusiasm, dear friends, and without harboring any attitudes of revenge or superiority— glad tidings. The good news comes by way of most recent discoveries at certain archaeological digs in the distant terrain known to be ancient Canaan. Authenticated beyond a shadow of a doubt, many accounts of those golden days of old have come to light as scientifically and historically true, not least of which is the glorious story of Samson.

Popular instruments of public information have too long been mute on the topic of this exciting progress in Biblical research. Godless newspapers, and even more diabolical television producers, have kept hushed the many exciting discoveries which transmute, like lead into gold, Biblical legend into fact.

An example of these cover-ups might be informative. The reader is probably not even aware that the site of ancient Sodom has already been unearthed near the plain of Zoar, and corroborated by Biblical citation. Remains of Sodom’s ancient inhabitants, along with finds in its sister city, Gomorrah, have been meticulously excavated. Consequently, specimen remains were discovered with petrified parts intact, some still inserted. Buried in heavy deposits of ash and brimstone sediment, those Sodomite parts were greatly damaged and nearly indistinguishable. But further analysis and DNA testing yielded conclusive proof that the Sodomites did indeed live the lifestyle for which they have been celebrated.

Then, even more exciting are the results of years of assiduous research collated by a celebrated international team of experts assembled in Haifa, working in close collaboration with American biblical scholars at Brandeis University, as well as German archaeologists under the auspices of the Reiches Museum of Berlin. These eminent scholars in the field have authenticated and— with shudders of excitement– announced the actual jawbone of the ass with which Samson slew an impressive number of Philistines. 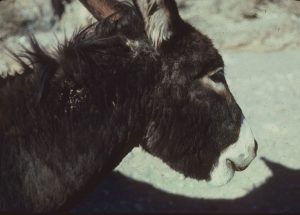 This miraculous bit of ossified legend has only been recently recovered from excavations in western Israel, formally Palestine (known to ancients as Ramath-Lehi), a place in Judah near the Philistine border. Inquiring minds should be aware that the Philistines were “sea people” occupying what is now known as Gaza, their name being perverted by the Greeks to “Palestine.” Authenticity has been conclusively verified by carbon dating at the dig in ancient Palestine correlating traces of DNA in several long hairs found wound around the deadly jawbone. Doubtless these were traces of the locks Samson ritually wore as a devout Nazarite before his encounter with the Philistine hussy, Delilah. 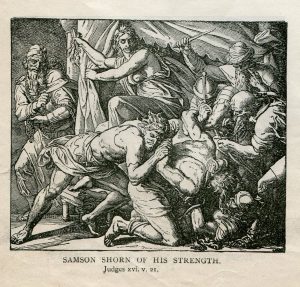 Merely one point of Samson’s legendary feat still casts a shadow of doubt: that would be the actual figure of one thousand Philistines whom the mighty Nazarite reportedly slew. Dr. Josh Bosch, who holds a distinguished chair at Ebenezer Evangelical College of Virgil, Illinois (professor emeritus in the field of Old Testament archaeology), is uncomfortable with the figure reported in the Book of Judges. And he has reason to doubt.

A thousand bodies simply have not as yet been recovered. Thus, perhaps in that one detail we will have to allow the Scribes a bit of poetic license. But even though the numerical quantity of a thousand Philistines may be slightly inaccurate, the feat itself has been authenticated. It has been proven that a great number of Philistines had been defeated by the slashing facility inherent in the head of an ass.

Why an ass? Why a lowly equus asinus? This was the subtlest point to challenge scholars: the weapon of choice. Wasn’t it convenient, sceptics scoff, that a jawbone should just be lying about so handily for Samson to grab? The truth, however, is that that particular item would have been quite available. It is well-known within academic circles that the art of cephaleonamancy, or foretelling the future by the use of asses’ heads, was quite the rage among the Philistines. Priests of Astarte were constantly foretelling the future by use of donkey crania. So the answer is a verifiable and resounding, No! It was not coincidence. Avraham Likud, writing in the Archaeological Review affirms that it was not so much convenient as it was likely for heads of asses to be scattered in plenty around Rameth-Lehi or whatever territory Philistines inhabit. 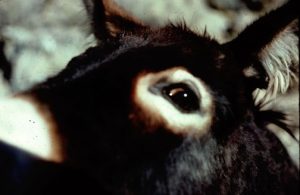 So then, holding that crucial piece of evidence firmly in hand, the question remains: What particular advantage does the jawbone of an ass demonstrate as a weapon? The answer relies on simple physiology. 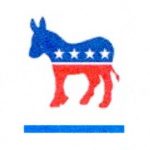 Anyone unfortunate enough to be within hearing knows how a jackass is capable of unnerving bystanders with its loud remarks. Experts refer to the phenomenon as the “braying effect.” That is, when the animal opens its jaws wide, and sounds its call, the surrounding air is filled in large degree with an obnoxiously paralyzing noise. It is only then that one realizes how indeed is the ass a potentially dangerous animal. Ordinarily considered merely a dull and stubborn beast of burden, yet the creature actually carries enough force in its jaws to disable, and often destroy, many serious enterprises. Witness its effect on a committee or a faculty, or even on the Philistines as a whole. 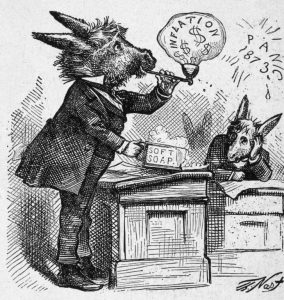 So then, inquiring minds must ask: How did Samson bring the whole thing off? Well, we must admit that once again Hollywood got it right. It must have occurred exactly according to the scholarship of Metro Goldwyn Mayer (interpreted by Cecil B. De Mille and originally enacted by Victor Mature) how Samson entrenched himself in a narrow gully quite like— if we may be so bold— a GI in a foxhole. In this entrenched position there was no choice for the Philistine troops but a full frontal encounter against that merciless jawbone.

Therefore, the advantage of the gully enclosure, fortified by the braying effect of the jawbone’s slashing action, Samson’s strong-arm position was rendered wholly impregnable. And the opposing attitude in which the slaughtered troops were strewn proves it, because hacked remains of Philistine troops were found lying heaped in a straight unambiguous line of attack . The bodies themselves are easily identifiable by their Philistine effects: flashy jewelry and cheap mass- 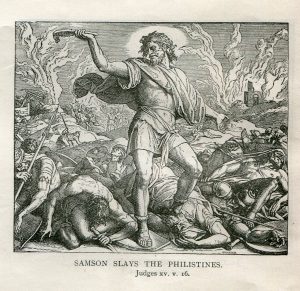 produced weaponry. (We trace the same tendencies today in their contemporaries who sport gaudy chains and gold trim for the Mercedes.) Nothing about the Philistine troops or their martial equipment suggests the slightest possibility of an adequate counter assault against the jawbone of an ass wielded by a mighty arm of God’s own chosen. 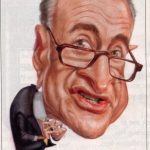 Yet, alas and alack, values are now drastically altered. It is with heartfelt sorrow to report. Sad, how all has fallen from former grace and majesty. Sad to see, that is, how the sons of Samson have themselves taken up with the Philistines. How they themselves employ that same lethal force— the jawbone of an ass— for their own twisted purposes.

No greater writer than Twisty McFate himself, creator of all scenarios, could script a tale in which the children of Israel, sons of Samson, would in these latter days pull the old ironic switcheroo of fate and rally behind the Philistines who now wield official jawbones. And how did it happen that so many are beguiled? Brothers of Einstein? Inheritors of ML King? Not to mention Greeks and Romans. It simply goes to show how power may throughout the ages lodge relentlessly in the jawbone of an ass. That they— inheritors 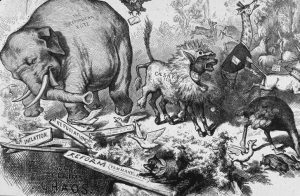 of the Torah, pitiful victims of the various pharoahs and slavers mucking up history— that those progeny should cheer on and close ranks with the pharoahs and slavers in their own neighborhoods and nation: that they would heed reaper reporters with sheep heads tended by Cyclops TV, that their children become Cossacks-in-training against the middle class while ignoring giggling thieves and laughing murderers— occurrences to defy prophecies of old Jeremiah himself.

And among the many ironies that Twisty  McFate throws at us, many are grimly amusing: that overgrown children should lend credence to a Plagiarizer in Chief who puts boogeymen in their heads. Amusing that they should cower when the Conqueror of Corn Pop brays out the lie that the opposing party will “put them in chains,” when he himself sits as dubious head of the Donkey contingent— party of slavery, Jim Crow, and sympathy for the Devil. The king of credit card debt, friend to Ping and rival to reason, he brays louder than any other jackass on the planet falsehoods denying basic freedoms which have been fought for since Samson slew Philistines by pulling temple structure down upon their braying heads. 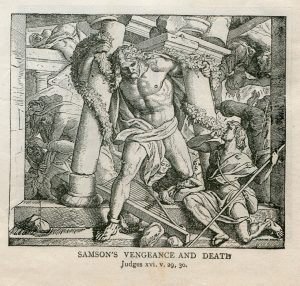 Yet with a measure of charity, and immeasurable disbelief, we marvel at how so many of the faithful— as well as faithless— have been given to such extraordinary babble hee hawing digitally across earth and sky. How great is that little tablet of dalliance, the doodle box, offering such rabid belief against so little reason, thrust in the hands of those who command with childish nihilism the blather of blabbers. Not the faith of a Samson bringing down temples of corruption, theirs is a goose-stepping adoration for a plagiarizing Philistine, one who corrupts the word of law.

But understand, we here at 3T hold no personal animus. Christian charity remains intact. The largess of human forgiveness extends even toward foolish believers and prattling scoffers. Only this, since we are all too human, it’s therefore unavoidable to feel a brimming sense of pride. The eye is swelled with righteous vision like a mini-Samson. Senses are fortified by revelation and television: how we may see, as though on a darkling plain, forces of evil, braying. Either a faculty of Philistines or a congress— we may now behold all those numbers held in such stubbornly stupefying abeyance by the jawbone of an ass.

And only one question remains: Where is Samson when he’s so needed to take that jawbone away?