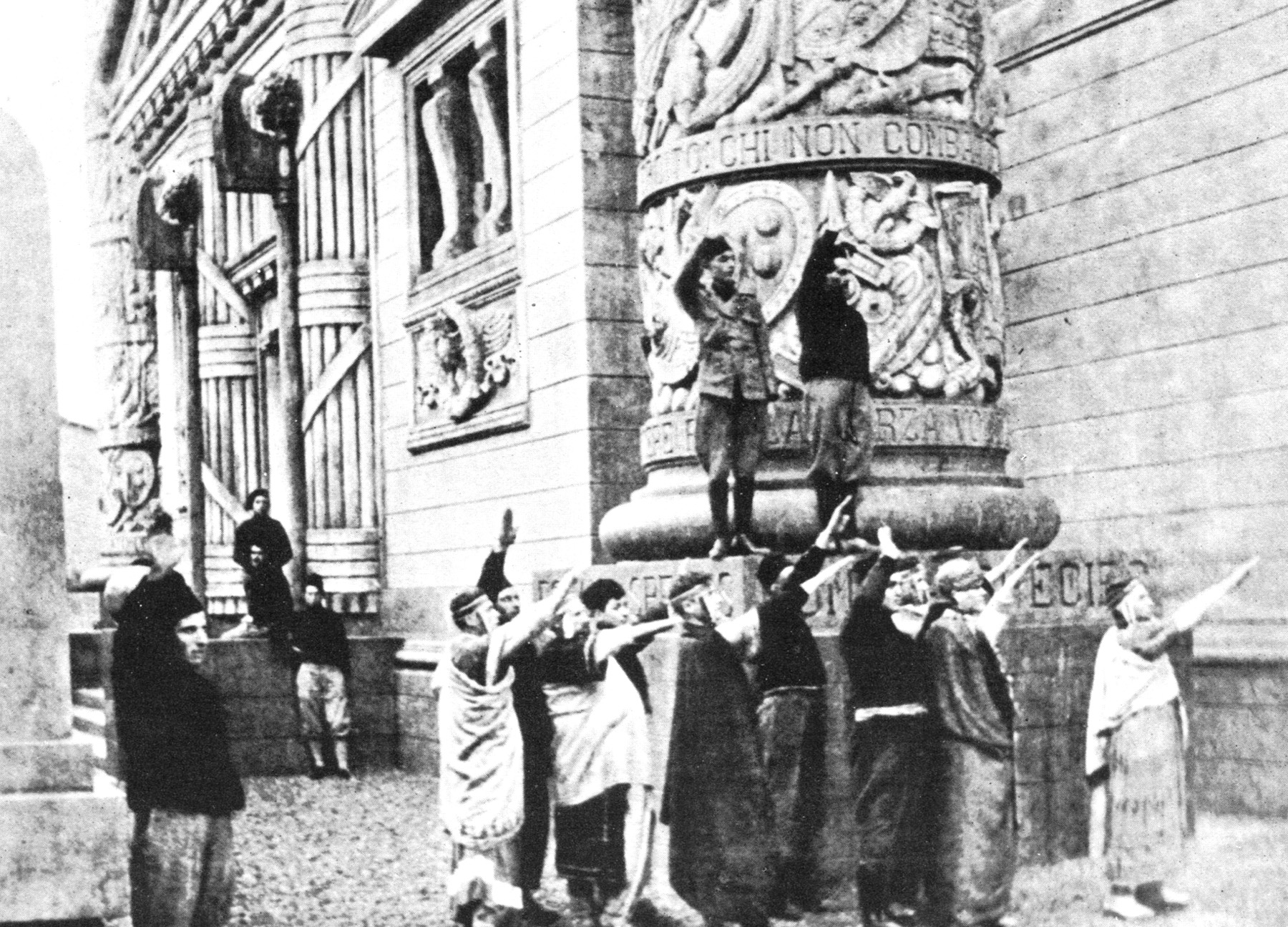 ☞  Observing current English usage, with all the cant and can’t be said, foreboding words and forbidden words… So much blather to uncover and so little time. Yet, with that incessant barrage of new gobbledy gook hitting at us from all sides, the task of launching yet another term goes begging.

☞  The particular neologism under consideration in  the Trying Times bunker library designates primarily “the act of saying the opposite of what is thought.” Yes indeed, there exist many terms for saying the thing that is not: contradiction, hypocrisy, or just a plain two-faced form of bullpucky. The term we’re explicating contains all of these phenomena, yet a trifle more. Not only a lexical term, an educated grunt, our favored label assumes an entire pose, a feeling and a state of mind. And in order to establish this I must reach back to the days of shooting pool at Les’ Pool Hall for supplying the key illustration.

☞  Any good pool player is familiar with the shooting technique of reverse English. Using it, the shooter addresses the cue ball with the tip of his stick down low. With this application of “English” on the cue ball, it will strike the target ball with a reverse spin so that, instead of following the struck ball forward, the cue bull will spin backward. The backward spin is desirable for “shape,” a term for achieving a good position for the next shot. And that’s the most important thing to understand about reverse English: shape on the next shot.

☞  Reverse English supplies a most apt label for the everyday exercise informationalists employ by reporting events with a favorable opposite spin on what is actually true. A most shining example of reverse English has to be the accusation of Donald Trump colluding with Russian elements when all the time it was his rival, the hilarious Clinton, who was involved in selling off uranium rights to the Ruskies— most likely by the use of her secret server. As a child growing up under the Red Scare, this is one of the most glaring— if not morbidly amusing— examples of Reverse English usage.

(As a personal note, memories of shooting pool at Les’ are always accompanied by the voice of Little Richard rocking the jukebox with “Slippin and a Slidin.” So in this most appropriate year of the rat, Reverse English appropriately guarantees piles of words all of a slippin and a slidin around variety.)

☞  A classic definition for reverse English might be projection, a term used in psychoanalysis for a patient projecting his or her own faults and hangups onto another. Reverse English emphasizes the language involved in the act as well as the dynamic of projection. The Antifa organization offers a perfect example: self-proclaimed anti-fascists who exclusively employ fascist tactics. That’s slippin and a slidin with a heavy beat. 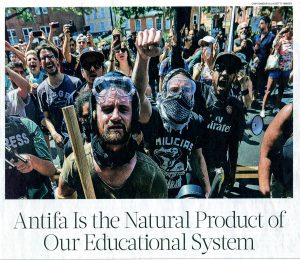 ☞  Aside from basic terror tactics employed by the “anti-fascists” (destroying properties and hurting people while receiving cheering accolades of approval from deconstructionists and their bureaucratic counterparts), the so-called anti-fascists even sport traditional fascist fashion. Not only are black shirts part of their chic ensemble, but black battle hoods with matching black vests over a black heart. They are well supplied with the proper clubs, signs, projectiles: all of which recall in greater detail the original fascists of Mussolini Italy. They even deploy something as touchingly reminiscent as Molotov cocktails to warm the heart of any old veteran fascist. 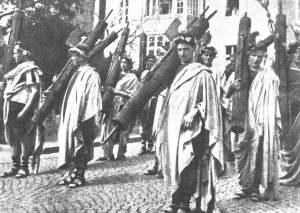 ☞  In a previous blog (June 2016) we explored the silliness of tergiversation, “Tergiversatyrs Ball.” The piece was structured along the lines of joshing people who really never graduate from high school. Like dopey sophomores, they will follow the crowd at every step— even if it means denouncing the personal self of yesterday. So tergiversatyrs wind up contradicting themselves with every new day of their jargon-driven lives.

☞  Consider how so many had their collective panties in a bunch over the coming of the New Ice Age! Then it was the Ozone Layer Depletion to cause untold harm! Now Global Warming threatens every child! First it was Freud as the only interpretation to our behavior; then Freud was blanked out and all his work deemed inappropriate. (Imagine how silly it was to think that sex was a major drive in our lives.) Then the Y2K crisis threatened a shrieking crisis that every computer would explode and revert back to the hoola hoop it was made from. Life as we know it would end! But humanity survived Y2K only now  to be threatened by the global warming causing a pandemic of systemic racism! In each case, if these conditions are to be realized, the slippin and a slidin of reverse English is required.

☞  Remember: in preparing for a shot, one must finesse the cue ball so that when it hits, it reverses the direction of contact and spins backwards. But there is a finer point to Reverse English. If the ball is cued low and to the left, it spins back to the left. If cued right… well, you get the picture.

☞  Note how fascists with cameras and mikes perpetually angle on a story by always cuing low and to the left, such as when President Trump made a perfunctory telephone call to the President of Ukraine and got impeached for it. That was definitely low and to the left. The entire fiasco provides a really cool example of cuing low and left reverse English merely by contrasting that bogus impeachment charge with Reverse English on how Joe Biden just months earlier threatened that same Ukraine president for investigating  son Biden— and then bragged about it!. How was that for a neat-o reet-o shot on the money ball. Straight through to the inside pocket, slippin and slidin, he’s now president.

☞  But the most tedious low left cue would be the invective shots about Trump being a liar. Liar was synonymous with the same man who kept more campaign promises within living memory. Amazing— a word over-used today but quite appropriate here— amazing how someone of Donald Trump’s achievement— buildings, campaigns, contracts, etc.— left no significant tracks for news hounds to slobber over.

During the Brett Cavanaugh hearing, attempts to derail an apparently proper man drove news hounds to sink ever lower— down to bottom level— by going through the judge’s school year books. What could those tomes have possibly revealed? “Look, look here! On this page, one of his team-mates refers to Cavanaugh as ‘an ol’ ass bandit.’ That proves beyond a doubt he’s a rapist!”

A most amazing pile of reverse English is excreted each time Bernie Sanders calls Trump not only a liar, but a “pathological liar.” Bernie Sanders says this. Not only does Trump lie, according to Sanders, he can’t even help himself. But we’ll have to disagree with the honorable senator.

☞  Trump acted more like a compulsive truth teller, the thing that makes him most offensive to some. It gets down lower than Cavanaugh year-book-level when one blabber personality made it possible for voters to know how and where Trump liked to grab women. People know this item via an “off the record” locker-talk remark to a low cuing blabber ball. It turned out as a miscue, though, a transitory swipe at Trump. And there was certainly no censure for that rat from the blabber industry… Just doing his job, another snake slithering in the swamp. Yet his wretched attempt went slippin and a slidin into an inadvertent advantage. It helped show how forthcoming, open, and human the Trumpster was. And the beauty part was that the revelation came forth at the betrayal of a treacherous snitch. Seeing Trump in that light, he showed himself as being even perhaps as truthful as Bernie Sanders. 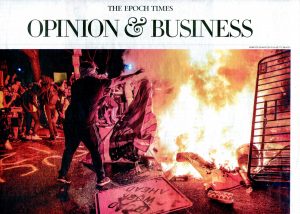 Senator J Nadler, who saw great national threat in a presidential phone call to Ukraine, saw no harm in the destruction of American cities. When Nadler the Impeacher was questioned about the summer city riots, he dismissed the destruction as “myths.” Buildings burned, people beaten and the lives destroyed were mythical to the honorable senator. Yet, slippin and slidin a few months later, an unfortunately over-exuberant indignant crowd doing minimal damage in the capitol (other than to their own person) was sufficient cause for Nadler the Impeacher, among other impeccable Impeachers, to justify thousands of armed troops in the capitol.

☞  It’s not such a long wait anymore for tergiversatyrs to cry between crises. No longer a great gap without something to whine about as it was in the days of yore from the coming ice age! To global warming under the hole in the ozone layer! While braving the racist threat of Y2K!

☞  Recently, the American people were treated to the myth of peaceful protesters, which was, soon after, cued down low as Insurrection by Enemies of the State! Reverse English on steroids. Oh yes, throw in the pandemonium of a pandemic for the instrumental background sound of slippin and a slidin. It must be a helluva bother for a tergiversatyr to wake up each morning and work on betraying the life he betrayed yesterday.

☞  Amazing, with armies of snoops and snitches up to the highest levels, it is most amazing that Trump could emerge so clean. If he had spit on the sidewalk illegally, we would have heard about it by now. And we haven’t. How could he have been a liar above and beyond Clinton stature— and we never heard about it? Either Trump is the most clever super-criminal of comic book proportions, or he is something rarely seen in Washington circles: an honest businessman politician, maybe even a grateful American observing rules that would help his country.

☞  The only thing Trump doesn’t seem to be very good at is Reverse English. He leaves that to others.