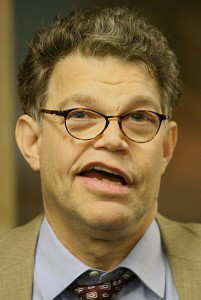 Al Franken finally redeemed himself. After failing miserably as a comic on Saturday Night Live, and then helping with the decline of SNL itself, he got to become the funniest senator. In fact, the decline of humor in Saturday Night Live can pretty well be traced directly to Al Franken. He was the first in memory who began the tradition of unfunny comics—his humor based solely on the repetition of his name: AL FRANKEN. Following Franken’s unfunny bits, Tiny Fey finished the job. Now those pathetically infantile SNL comic attempts are no more than a Republican (read: Trump) rant, followed by peepee dickie poopy bits. They’re so landlocked on PC Island, that’s as far as they can go.

But Franken redeemed himself in the senate and turned it into Saturday Night Senate. There was ol’ AL FRANKEN on a panel accusing Attorney General Sessions of “collusion with the Russians.” And the funny man based his assumption on the fact that the Russian ambassador was in the audience when then-Senator Sessions addressed a group of a hundred or so of those ambassadors doing ambassadorial duty in America by enjoying legal immunity and eating free caviar.

Oh yeah, the other moment of “collusion” was in the office of then-Senator Sessions meeting with a smaller group of ambassadors. That occurred when Sessions served on the Foreign Relations Committee, and it was part of his gig to deal with those foreign ambassadors eating more of our caviar.

So that was the “collusion” AL FRANKEN was referring to: being in the same room with a Russian. You gotta admit, that is funny.  Funny in so many ways. First, if that was collusion with the Russians by being in the same room with one, then I’m a pal with Paul McCartney. Wasn’t I in the same Tokyo Narita Airport with Sir Paul? And then years later, he was seated right down from me in a Mexican Restaurant in Pasadena. I guess, according to funny Senator AL FRANKEN’s sights, that makes me and Paulie best friends forever.

And what’s that bit on why the Russians would not want the Hilarious Clinton to win instead of Trump? Why would they want a president who plans to arm up the troops? And why would they work against a dippy reset-with-the-Ruskies Alinsky fan? A lefty working with George Soros who wants to “end American supremacy” in the Obama tradition? Clinton promised to follow in the footsteps of the Obama who fondled the knee of a Russian emissary and promised he’d “have more flexibility” for his Ruskie pals after he got re-elected. And what kind of flexibility was he talking about? So I don’t get that one. But that’s the way it is with Franken’s humor: You just don’t know what’s so funny, except his name: AL FRANKEN.

Franken’s humor is especially curious when he’s hitting on the authenticity of Trump’s election, while his own race turned into a sour comedy. Remember Franken’s first election when it was announced that his opponent, Norm Coleman, had won? Then the whole thing went into dispute about ballot count (Sound familiar?) Then— abra cadabra— it was Senator AL FRANKEN! Guess they had to recruit more of the zombie vote in Minnesota. Or maybe they had to thaw some out.  So AL FRANKEN gets to do his boring bits on Saturday Senate Live, serving on a 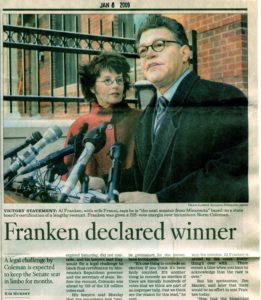 committee hearing about Trump’s campaign, and he was reading from a script again. Did they put him up there because he was Saturn Night Live?

To be sure, Vlad the Putin is out to disrupt whatever government he can. In 2015 Russia bankrolled their radio TV network RT, giving them four hundred million smackers to put out propaganda for the purpose of decentralizing governments, especially the good ol’ US of A. And it seems to be working quite well, especially with the help of people like AL FRANKEN and the hordes destabilizing the entire political process clear up to the White House.

Best conclusion I can draw on the whole thing is how we all get funny in the end. History is a whole shit pot full of those jokes. You probably heard about the guy who said that those who do not learn from history are condemned to relive it? Santyana was right, of course. We keep living it and living it. But there’s another reason to read history, and AL FRANKEN shows why:

Those who do not learn from history are condemned to miss the comedy.

…from the JoCo bunker