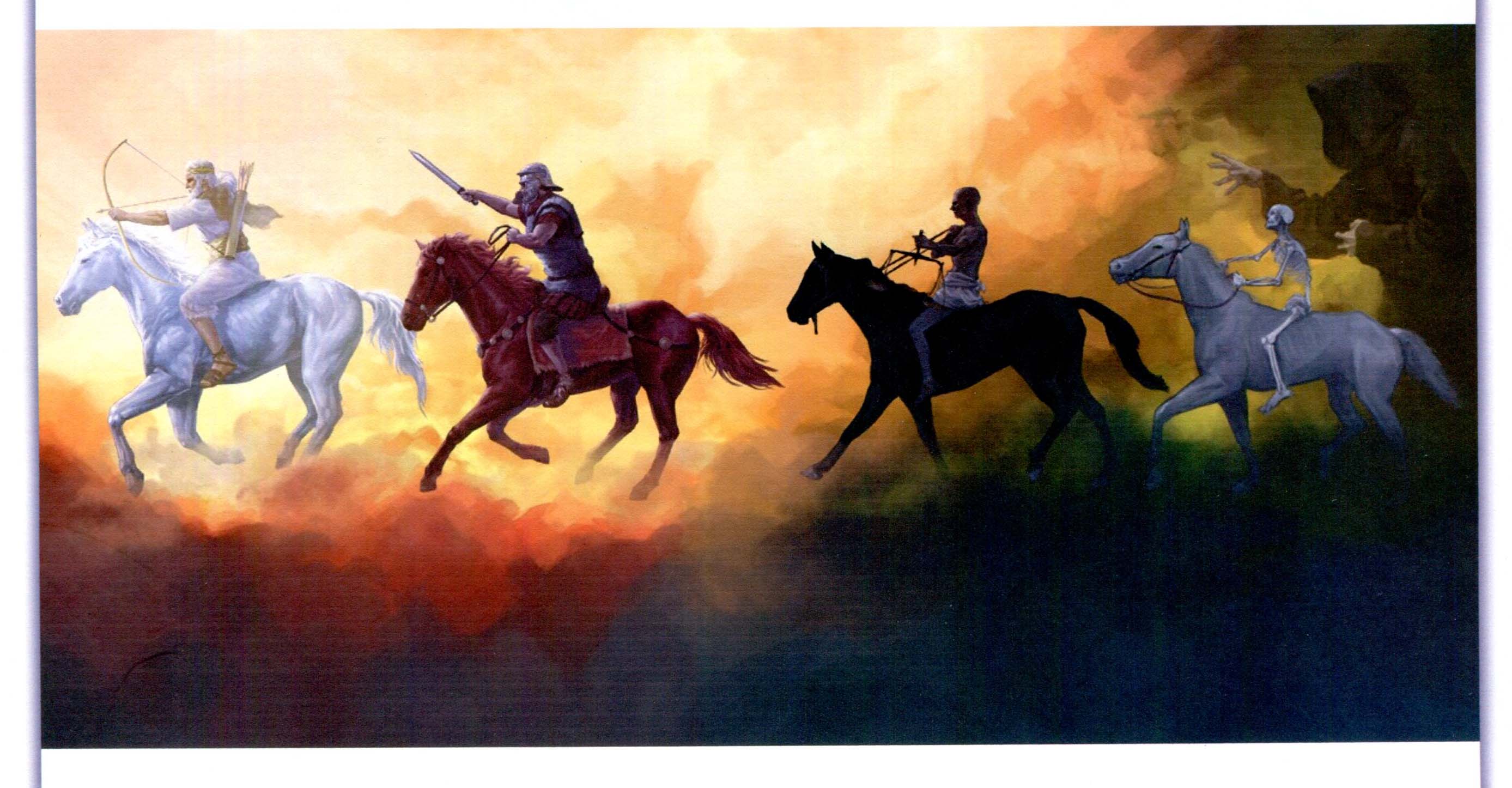 It should be easy enough even for a jarghead to grasp that diseases are named according to regions of outbreak origin. That reveals its vector of progress, or how it spreads. So some folks really should get the spring rolls out of their butts which seem to keep them stuck in the low bowing kow tow position,  probably bent over from all those Chinese dollars they receive. They should instead stand up straight and recognize that the Wuhan Flu Virus label is in order. 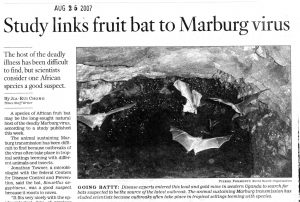 ☞ Marburg disease originated in 1967 in Marburg, West Germany, caught by medical workers examining monkeys from Uganda. Ebola originates in the Ebola River area where the village of Yambuku resides, the location of origination, while Reston Ebola is named for a worker contracting Ebola in a lab in Reston, West Virginia.

So where is Covid? The same place as HIV or HINI or other blurred locations of origin. Some complications of disease may offer labeling problems, but the origin of Wuhan Flu is rather well-established among those of us who still see through communist propaganda. 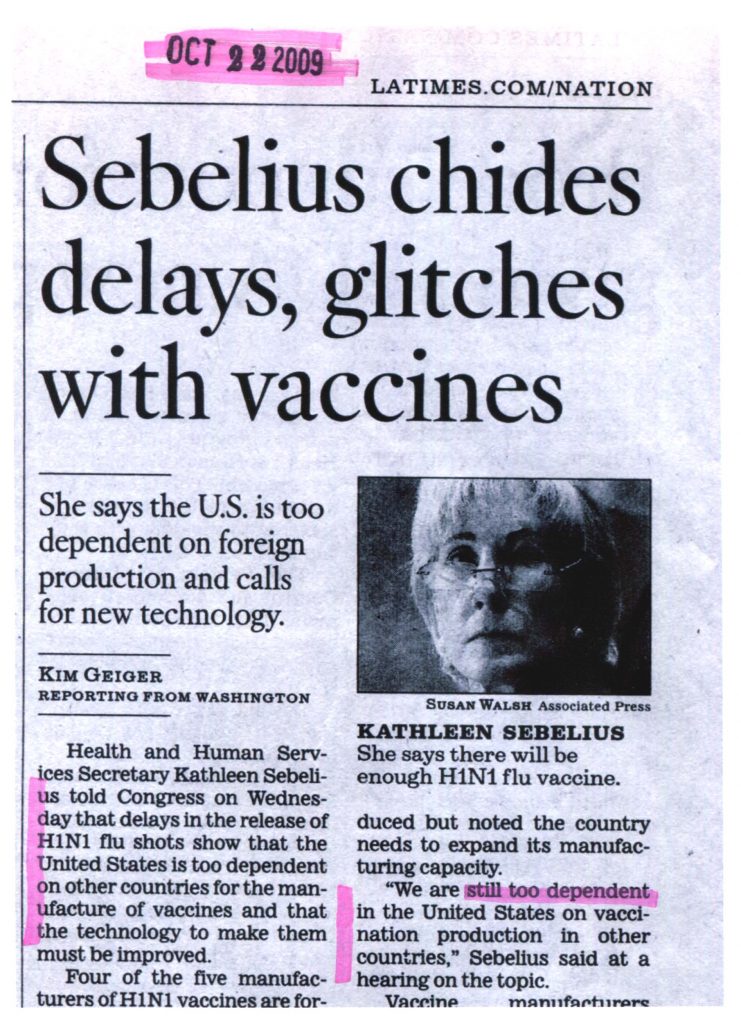 While the Obama administration is haggling over Affordable Care…

But as far as location goes, take for example the saga of Ebola. A Belgian Catholic Mission Hospital in the village of Yambuku of central Zaire was discovered to be the site of the index (original) patient of a virus that was named for a local river. But that wasn’t the only Ebola-type virus in the territory. 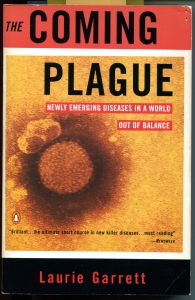 Followed by torturous canvassing of the African bush across Zaire, another infection was located in Southern Sudan around the city of Maridi. An interesting account of tracking this disease can be found in Laurie Garrett’s book The Coming Plague. In it, she describes the arduous four-hundred mile journey of one CDC member, Joe McCormick, who made the trek from Yambuku to Maridi in Southern Sudan. The making way through bush country was a titanic struggle, so needless to say travel was less than frequent on that route. Yet, upon arriving in Maridi, McCormick discovered that the Ebola virus had already mutated. As Garrett put it: “Nature had dealt us snake eyes.” So that Ebola required a different name— Maridi Ebola— as a result of a different contagion. 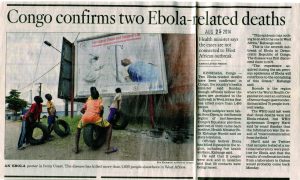 The salient point about the route across the Congo land is that it took far longer to trek than it would take any citizen to get on most any airplane and arrive at the farthest waypoint on the globe. Since intercourse throughout the Global Village is unprecedented, most anyone with the price of a ticket in his or her jeans may travel, and get anywhere in greater numbers.

☞  The numerology involved in this mass mess creates numbers which are truly numbing. Not only does most of this migration result in a world full of goofy tourist concessions, but it also affords great numbers of humanity the swift importation of infectious killer diseases. So many deadly vectors looping out into distant neighborhoods which have absolutely nothing to do with the original incubation and transfer. And the numbers are not only made up of family members who must visit families in Wuhan and other waypoints; they also  make marketeers drool for vast foreign markets to exacerbate the toll. 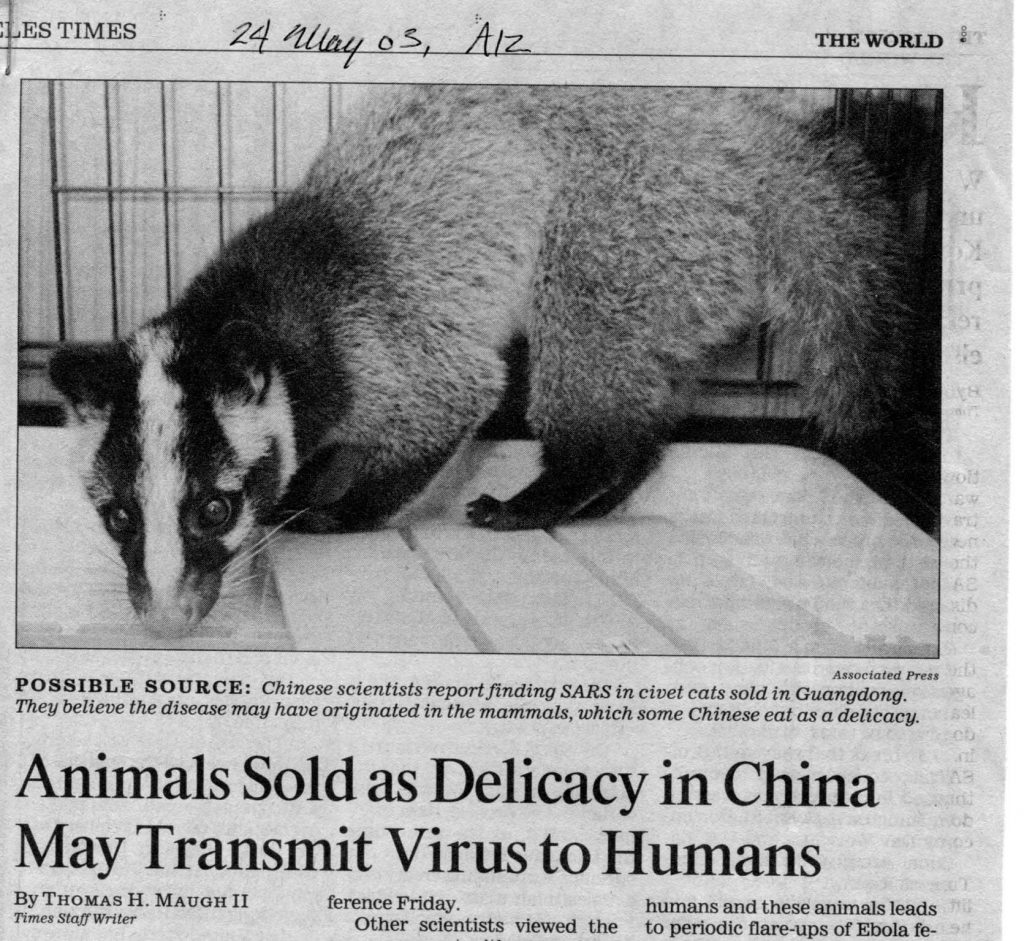 So many more numbers operating… Such a geometric rate of increase creates an additional effect: speed. Rapid numerical increase requires everything to speed up. This is easily imagined by a one-child family compared to a ten-child family: see how the latter mama moves faster. That same principle speeds up armies, suppliers, governments, travel lines, not to mention the entire human race.

☞  This is a condition which gives an opportunity to visualize humanity as that metaphorical horse race we see in the Book of Revelations. Not necessarily a literal believer in Apocalypse, it does offer a tantalizing prospect. Take, for example, that aforementioned outbreak of Ebola in the Congo. In order to appreciate it as a metaphorical horse race, some visual aid may be useful.

In the accompanying chart, take the location of the Ebola outbreak that first caught America’s attention about the time of the bicentennial. This was in Yambuku, Zaire, which makes point A. The collateral outbreak was subsequently located in Maridi, Southern Sudan: point B. So a line drawn from Yambuku to Maridi forms one leg of the race track. A third point would be the Olduvai Gorge 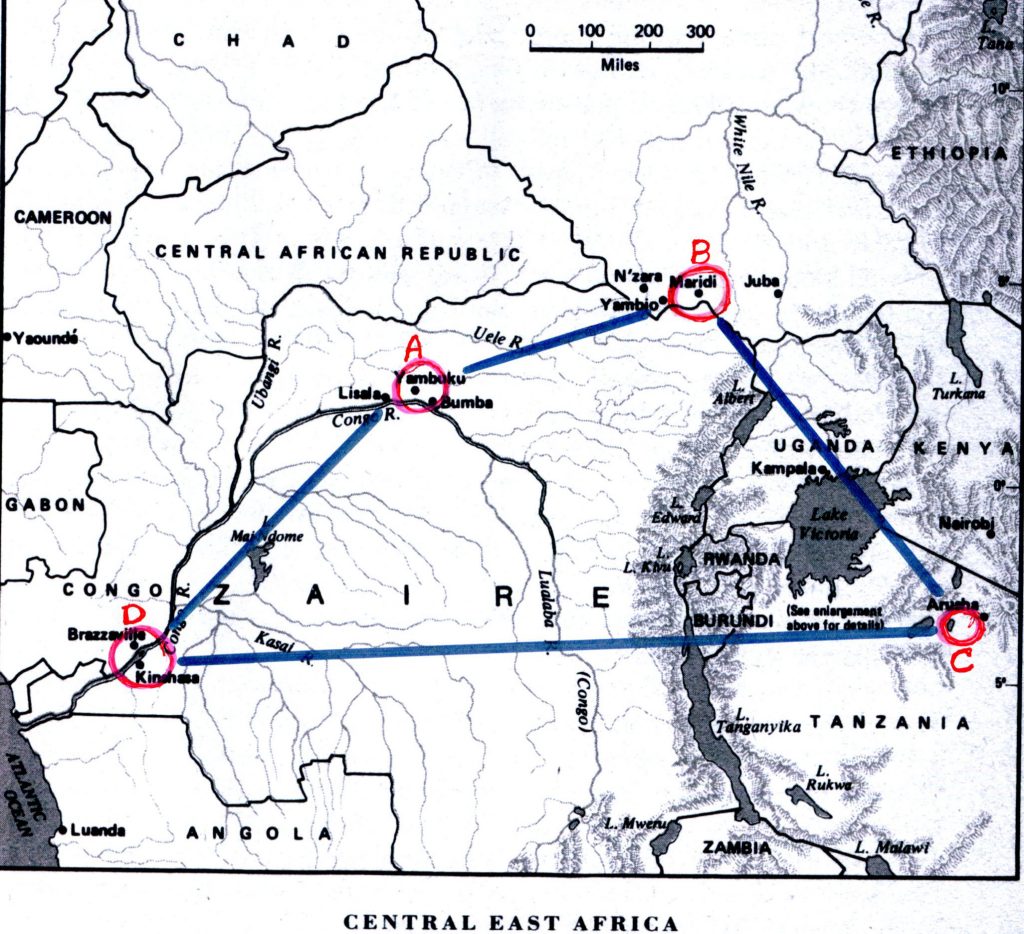 in Tanzania’s Serenghetti region. So the line from Maridi to the Serenghetti forms the third point C to form the far turn in the track. And finally we wind up in D— or Kinshasa, Zaire— where CDC members disembarked to began scoping the outbreak of Ebola.

But why, the sober reader asks, is the Olduvai Gorge of Tanzania considered in this picture?

Simple. That point on the race track approximates a known point of origin of the human race. And isn’t that the race we’re actually talking about? The Olduvai Gorge offered to archeologist Louis Leakey remains of the oldest human prototype known. That’s where the starting bell sounded. And then they (we) were off.

☞  Years ago in Australia, in the Sydney Museum of Natural History, there was a chart describing the evolutionary distribution of man. Europe, the placard declared, was merely a “backwater” of evolution. There was no further explanation of why the current human evolutionary forms have European names— and origins— if they were part of the “backwater of evolution.” One type named after its place of discovery in the Neander Valley of Germany, the other after the Cro-Magnon region in France: Neanderthal and Cro-Magnon. The museum did not make it clear for the kiddies— or yours truly— exactly why the two most modern human forms evolved in a backwater. But what was clear is that there are some folks of European ancestry so guilty about themselves that they are ready to damn to death their own origins. And most likely they are the same simpletons who refuse to name the origin of a recent deadly outbreak of disease— which might already mark the losers of the great race.

There were in the Olduvai region individual offspring developing larger and larger brains, tool-using brains. Due to those bigger noggins, children took longer to mature. So shelters had to be established. Small social bands formed. Women gathered, chattering. Men hunted, keeping silent for the kill. And so we were off. The race had begun. 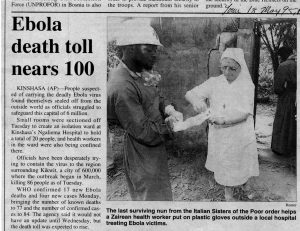 ☞  Therefore, from our present seat at this race track, let’s review the run. Sister-nurses from the backwater nation of Belgium “deplane” in Kinshasa, Zaire, to fall sick in Yambuku to a virus which has already mutated in Maridi, Sudan, a place which exists in a line where early man wandered northward to “backwater” Europe. How’s that for marking out a race track?

So we might go and enjoy the race we’re running, and call it by name: the Apocalyptic Global Sweepstakes at the Darwin Leviathan Associated Raceway.

☞  The race originally featured five entry horsepersons. Besides War Horse, Hungry Pony, Skinny Pony and Sick Pony, there was another entry called Hope For Change. But the legs of Hope For Change gave out and, unfortunately, she had to be shot in the stalls.

That leaves the pony from Hunger Farms being challenged by Sick pony. Heading the roster is jockey Terry Tory riding Skinny pony for Dearth Stables, and last but not least, the mighty War Horse owned by the Break Neck Group. 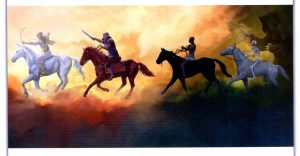 And there goes the starting bell!

And they’re off with Skinny Pony in the lead. Numbers are going up by the minute for this pride of Dearth Stables, jockey Terry Tory riding hard. But Skinny Pony doesn’t keep the lead for long. The Break Neck War Horse, odds-on favorite of the Four Horsemen, is closing fast on the far turn. They’re going neck-and-neck on the back stretch, War and Dearth, but they finally have to give up the lead. At the far turn the entry from Hunger Farms is gaining. Then all three, Dearth and War running half a length behind Hungry Pony in a tight cluster around the turn.

But coming up fast on the straightaway in a swift bid for the lead is Sick Pony. Yes, Sick Pony is gaining fast, faster than odds can count. Numbers going up, odds up too. Now in front, now by two lengths, now three. Smart money is piling up fast for Sick Pony.

I tell you, fans, you’re watching the race of a lifetime, the Apocalyptic Global Sweepstakes. All the way around from the Olduvai Gorge to Backwater Europe to Yambuku— who’s going to win the finish is anybody’s guess. Let’s just hope you’re all getting your money’s worth out of it.

☞  Might even work out that computers counting the bets will wind up winning in the end. Artificial intelligence may actually be the winners taking all. And if they do take over, it’s a safe bet they’ll know how to control their own health and reproduction. But then, they have viruses too…