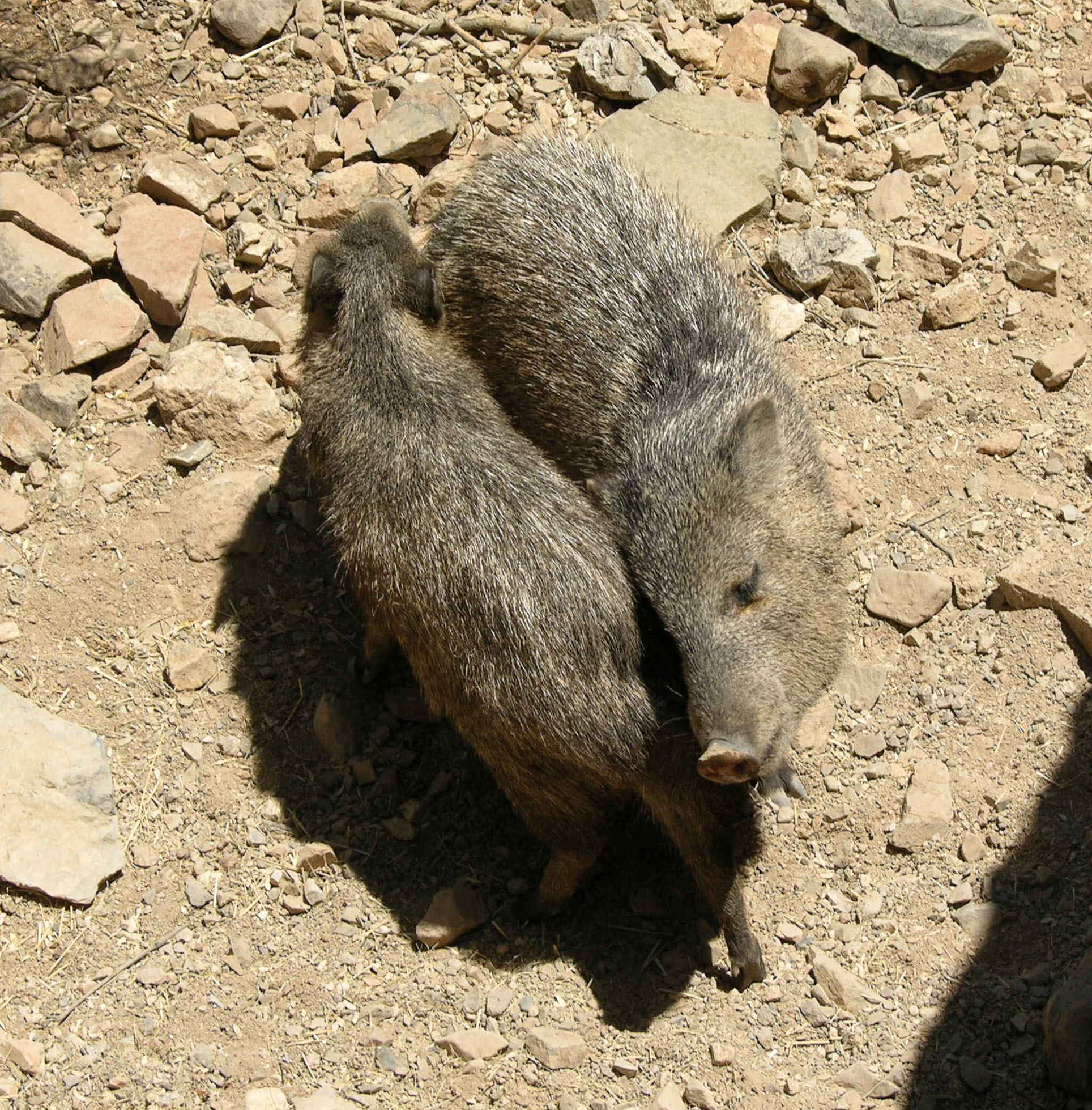 Sadly, people, unthinking people, often refer to pigs and pork in negative tones. Worse yet, they malign basically intelligent animals by comparing them to a species not much higher on the evolutionary scale: to wit, political animals.

☞ When it comes to their own kind, pigs— and peccaries in particular— are most tender in their passions, as seen in a photo taken out of an ordinary moment in peccary life, schmoozing each other. Something, we are told in the Sonora Arizona Museum brochure, that the affectionate porcine do all day long. In this, a lesson might be taken.

☞ Humanoids, on the contrary, are not expected to uphold such constant behavior. To make this obvious, even among intimate family members there could be friction fired up over the mere gossipy faces blabbering on a cyclops screen: humanoids blabbering about “coming together” amidst a hail of bullets. So plenty of passion is registered between individuals, but not necessarily positive. Not like peccaries. The only passion humanoids seem to demonstrate with automatic and constant readiness is pecuniary. We may therefore conclude that humanoid passion is not composed of peccary love. It is more a love of bucks, geetus, gelt, long green, and is therefore pecuniary love.

☞ Such pecuniary fondness has marked the American character from a time when Alexis de Tocqueville observed that citizens of the new democracy appeared more interested in commerce than philosophy. He also determined that science was esteemed only when it could turn out a profitable product.  The recent global love affair with China is a case in point. It reveals the passion for numerical sales that burns within the hearts of American marketeers. The Chinese, like most people (and certainly Asian masses) guarantee a margin of such high

percentage that every market equals everybody within. That is, buyers want what everyone else is sporting, wearing, even smoking: times a billion.

Profit and desire— how better might those two acquisitive quantities be symbolized than with the dazzling image of a desirable woman in a diamond-bikini? By this representation, love and pecuniary desire are intermingled. Indeed, where they hook up. The bulge of diamonds over love’s channel speaks volumes. Just the carats alone!

☞ Chilling analysis? Perhaps, but not meant to be critical so much as helpful. The citizenry may use more helpful information since current information comes out more often as gossipy blather than doctrine on the subject of pecuniary desire. It just might put folks in proper focus on current market plunges, depleted resources, funky administration policies, and barbarians slipping through the gate. It’s no picnic for a public accommodating the hard choices a mean clown administration presents. Bucks are harder and harder to come by. Demand for diamond bikinis is shrinking fast.

☞ Some guidance is therefore advisable. Domestic market expansion begs to be revitalized in order to recharge that old kick for commerce deTocqueville wrote about. Just one example involves the people of California needing to realize that they, like the rest of us, are addicted to petroleum. It might therefore be in the best interest of all to keep those oil rigs drilling on the coast– and more besides! This act of pecuniary plenitude could be accomplished without even spoiling the view.

☞ Gadzooks! How could oil rigs dotting our gorgeous coastline— the greenly skeptical Californian demands to know— How could that be accomplished beautifully? 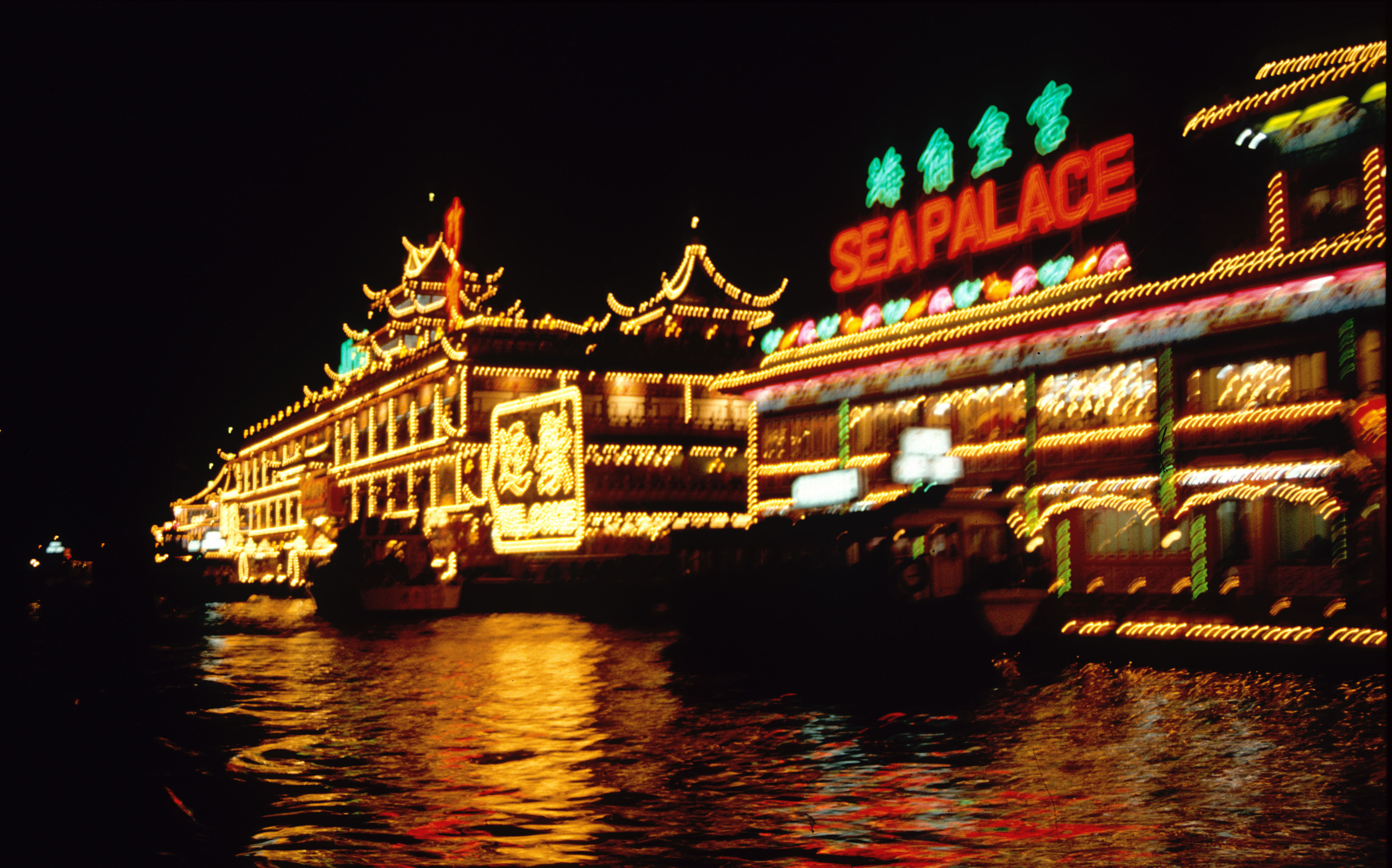 ☞ Oil rigs could be built to house on their platforms— alongside mundane pumping apparatus— castles of bright and lit-like-Vegas off-shore casinos. Casino construction itself should be no problem with the importation of Chinese artisans experienced at building floating restaurants in dragon garb, while this magnanimous gesture toward our Chinese trade partners would make the enterprise a global effort. The glorious sight of a casino pumping oil while housing people playing with their savings— how could that fail to delight even the heart of a Barbara Streisand or any other high-rolling coastal dweller? Even special helicopter pads are imaginable to transport guests from seaside pads to fun on the horizon. Air craft could gas up there as well.

Pecuniary love allows citizens the right to live closer to the heart’s desire. It fires a more consistent passion, unlike the piggish priggish peccary love marked by nearness of physical warmth, gentleness, politeness, and allegiance of kind: rare qualities in a time of plague and passion. Maybe too long has that bosh been tediously upheld, anyway. Markets, rather, mark pride of numbers. They are easier to behold in pecuniary love, like a diamond bikini.

☞ On the other hand, cash reserves have been piggishly bargained away. Pecuniary assets have been sold to the highest bidder, again and again, in every office and market to friends and enemies. In fact, enemies bid higher, with American currency. These egregious acts of insult should signal a time to draw closer together in a peccary style of affection. A time to draw shields together as a Roman defense against the slings and arrows aimed at the last democracy. A time to cling to each other as fellows locked in arms and facing a fury.

☞ It seems a more popular response is for individuals not to draw shields, but rather to crawl into shells. In the meantime, a 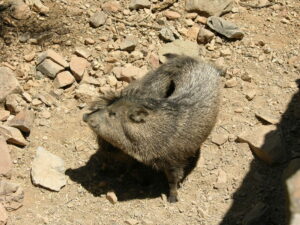 last clinging effort to keep failing status quo efforts going, whether from destructive Marxist platitudes or the insistent consumer equating freedom with geetus, bucks, gelt, etc. DeTocqueville’s observation of American fetish for the commercial rather than philosophical or truly scientific seems still in effect. No deeper dive is apparent. Science has been bastardized to include plague trade in pharmaceuticals. Commerce remains the reigning philosophy at any cost.

☞ And oil remains at the heart of the commerce. It still appears to be the only answer to a dilemma in which the western industrial base finds itself— whether gas-driven or lame electric– the answer still requires fossil fuel for its jolt. Besides literally driving the nation, products derived from dinosaur droppings form the centerpiece of modern civilization. Everything on the shelf: from gossipy doodle boxes shoved against the ear to sex toys shoved elsewhere, and everything else in use up to plastic credit cards for purchase. Plastic forms the skeleton of desire, like the keyboard spitting out these letters. Or like the manufacture of the electric car itself, a petrochemical masterpiece.

☞ Oil reserves are there for the taking. Wealth, the heart beats out, might once more be realized, diamond bikinis and all.

☞ And an additional plus might be added by way of our red brothers. Having already prospered by pandering to money-playing pleasures, tribal nations could lead the way to riches of casino oil prosperity. Constructing oil platform casinos could, in fact, help folks realize now what they didn’t notice while spending into desperate circumstance. It could hip them to the fact— conjuring a ghost of Christmas stores past— that toys really r us when pecuniary love rules.