So now I got this asshole on my tail.  But come to think of it…  Where else would you expect an asshole to be? See, there’s this kamikaze Honda on my tail.   He be zippin up my exhaust pipe like he wants to have an affair right there on the freeway, like he be one of those jitterbugs… 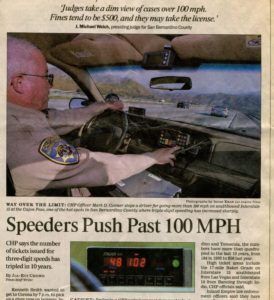 Jitterbug?  You know ‘em.  Folks with a tail-gating tick who jest love the smell of carbon one-oxide farting out the backside of Road America.  Jitterbugs jest love that stuff like it was the baddest grade shit goin around, you know, like they get high on the shit.  So they come up behind you for a sniff like a dog in heat and they can’t get round you fast enough to get a sniff off the guy in front.  It’s a road mob action in Karmania, sniffin tailpipes.

So you can’t drive less than 80 per or your ass is toast.  You’re jest a slow-moving target for a drive by.  At least the jitterbugs, God bless ‘em, are completely cured of slow lane fever. But that jitterbug on my tail, he ain’t the end of my troubles.

There’s this brothertrucker, too.  He’s crowding my left side.  And while he’s squeezing me left, screamin up the entry ramp on the right is this RV.  You know, RV, that’s a vehicle they call recreational.  But the driver don’t seem to be having too much fun at the moment.  He got him his Conestoga Combustible, his frigate on wheels, with motor bike cinched on front and mini-jitterbug towing behind.  He be his own parade.  He be his own wagon train.  And he be haulin like a herd a turkeys up the entry ramp. 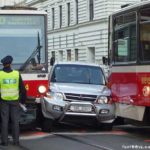 Only that trucker, he don’t give an inch.  Maybe it ain’t been such a happy day for that brother.  Maybe it’s been a hundred miles of high winds and red lights.  Whatever it was, when he sees that the squeeze is on, that good buddy jest puts his ol’ hammer down— that brothertrucker with Methedrine in his blood and Jesus in his heart and the round ass of the last truck stop waitress humping the lower orders of his brain— he jest puts that pedal to the metal.

And me, boss?  What do I do with that Peterbilt descending on my back door like the wrath of Jehovah? 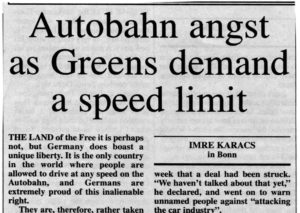 I think I caught the slow lane fever cause I wanted to see the trees.  And I never wanted to be a jitterbug.  I don’t like to sniff that carbon one-oxide.  So I drive slower even when the limit be higher. Once I did drive at the speed limit on a trip across Karmania.  On that whole trip I passed two vehicles, maybe, and was passed by all.  You know the young folks would pass, but so did the old folks.  And black folks and white folks, folks with sedans foreign and domestic, boss,

country folks in pickup trucks, folks driving wrecks with busted springs, Detroit bombs with wide shark grills scre-e-e-eaming up behind so that you could see ‘em grow in the rear-view mirror multiplying like a chromium virus. 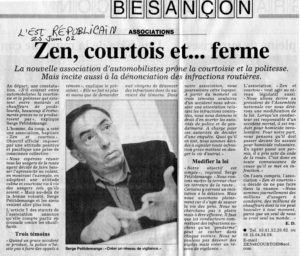 And you’d see the folks inside when they passed, sucking on a warm Pepsi, heads noddin to the rippety-rap of the local rock station and buzzin with deadlines and overtime and back payments and the kids got colds and making closing hours— like they be feeling the urge that sucked itself right out of the goop of the antediluvian past, like they be some new kind of biological jitterbug on a post-Paleozoic carbon high, hauling like crazy down some speedy path of premature suicide.

But I jest wanted to watch clouds grouping on a rosy horizon, boss. Instead I had to watch out for those jitterbugs sniffin the clouds comin out of my tailpipe.  I wanted to see Orion, boss, I wanted to look at the mountains.  And you know, boss, what I really wanted to do was cop a glance at pretty housewives in their cute shorts out in the yard bending over their petunias, and I wanted to see their petunias too.  Wanting to see all that gave me the slow lane fever. 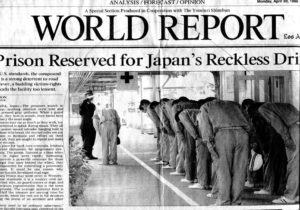 Then we was invaded by those little Japanese beetles infesting the free-for-all-way. You know ’em, boss– those Nipponese jitterbugs bearing down on a guy like Zeros flying out of the rising sun, two o’clock high.  But the faces behind those windshields were not from the Land of the Rising Sun.  They were smooth yuppy mugs.  Groomed heads and eyes painted with purple mascara, neon colors on secretarial faces, boorjoy faces all drawn up and serious-like jetting out from behind. 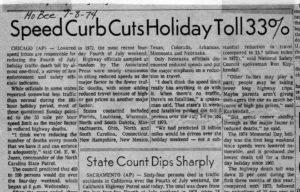 and everybody had to love it or leave it.  Slow lane fever. 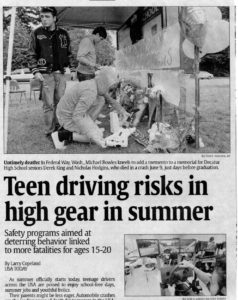 Spot ’em in a second.  Recreational drivers right beside the brothertruckers and hot rodders slogging and sweating in their bucket seats— twitching at the wheel, steaming at the rectal temperature of a hummingbird, a hot hundred and five degrees.  They be going all-out, schizo-bozo, dying to be in the fast lane, but hauling ass in the slow lane, trying to avoid getting caught without catching slow lane fever.

That jitterbug  don’t look you in the eye too much— supposedly looking at the road, but actually looking farther off.  But even though he won’t look you in the eye, I sometimes feel sorry for the jitterbug cause speed is all he’s got.   He’ll never catch the fever cause that carbon one-oxide is all a jitterbug really wants.  He must need that shit real bad cause he don’t seem to drive for nothing else.  So, when you take away the trees and the sky and the buildings and the landscape and walking people, take away rolling along in thought according to the nitty little things seen along the road, and all you got is goin schizo-bozo  jest to keep at maximum and be first at the next red light— then it must be that speed is all a jitterbug possesses.

It’s got a grab on ‘em that be downright mysterious.  Almost makes you want to say a prayer when they pass. 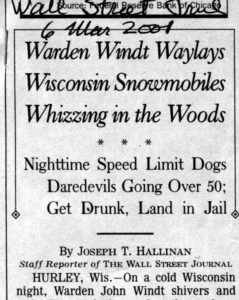 You rush right along, Jitterbug, cause you got a heavy pedal foot and you got to push.  You can’t do nothin else, like a zombie in your own movie.  But where you be rushing, JB?  Where be you lookin off to?  What city of insects where moves got to be in rapid tight-squeezed competition?

But no, that ain’t fair.  That’s only badmouthing the insects cause they go like any other creatures moving at a speed according to their size.  Only to us, the insect looks like he’s zooming on his own little mini-free-for-all-way.  Is that it?  That the real comparison? Jest zooming? 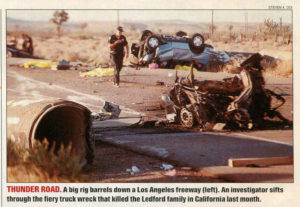 my hind side. Now, it’s a supervoomer sodding up the free-for-all-way.  SUV, a Speedy Unfriendly Voomer.  Those are the ones with tires the size of its driver’s ego and a center-of-gravity right up about even with a lard ass that don’t do no walkin.  So heavy and high, those supervoomers jest roll end-over-end when they tag you too close, sniffin at your backside.

And durned if it won’t be a supervoomer leadin the pack in a jitterbug clusterfuck! He heads a speeding daisy chain, each one hooked to the other’s tail, sniffin one another’s behind like a pack of pit bulls in heat.

So, I reckon there’s always gonna be some jitterbug chewing on my tailpipe, making his nervous little bid, then zippin ahead, a bullet head piercing the 21st Century. Specter of a new-age primal urge pushing out of primordial goop, he be dreaming of driving in Jitterbug Heaven, where all Fords are resurrected as BMWs, and every road sign says Faster!

But it don’t matter much, boss, if you got the slow lane fever.  That’s what it takes to keep your cool while being whizzed by a jitterbug clusterfuck.  What if the old volcano be blowin, boss, a hard rain fallin, the bridge out, a new century already dyin, pumps coughin, glaciers meltin, jobs goin, the ghetto in a riot?  Disease dead ahead and not far behind, boss, and the gas gauge saggin low? What’s the best pace to face it all?