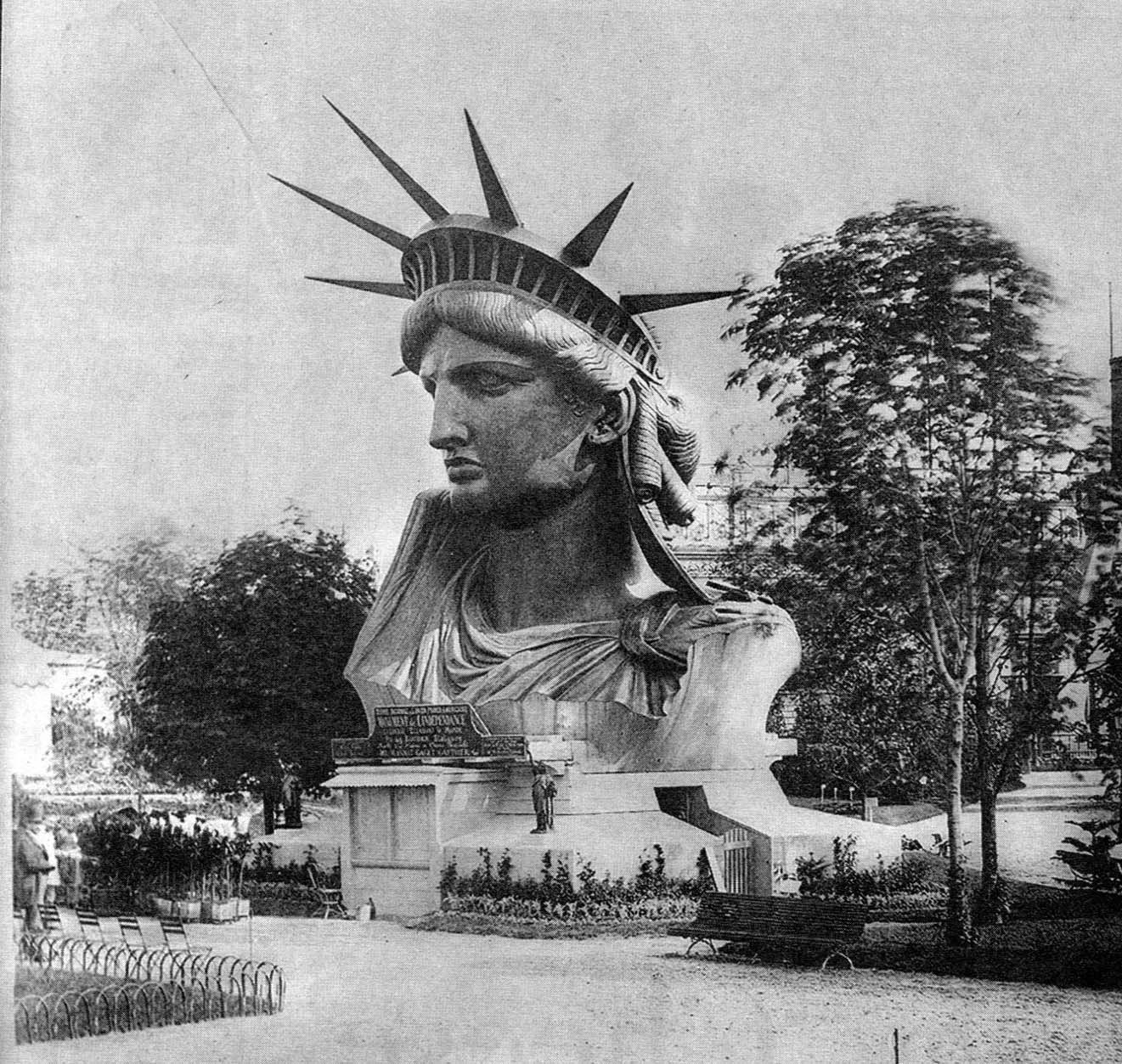 Sounding on our ongoing theme of travesty, one of the most odious of the emerging travesties is that of liberty itself in the modern age. On that score, The Statue Of Liberty Suite is presented. The piece is from 1990, after the Statue of Liberty had been refurbished. All that effort in redoing a statue which represents what might be a faded glory seemed doubly ironic since the concept of Liberty itself is in dire need of refurbishing. Routinely sordid political activities and careless neglect have banged the old girl around. Scoundrels and upstarts have really taken advantage of that representative of virtue who started off as a pretty nice lady.

It’s hard to believe that Statue of Liberty started out as a milkmaid in Minnesota. Nowadays, with all the publicity and glitz surrounding her life, the realization is hard for her as well. But those days are there, in the dimmest stirring of her memory, when she was a little girl toting pails from the barn. Even though she has her own island now, and minions to attend to her, she has never forgotten her humble background. She has never forgotten looking out over pastures swathed in the pale hues of evening, a milk bucket in each hand, thinking: “So much land for the wind to whistle over.” 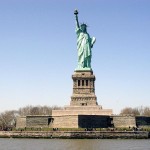 Statue of Liberty loves to swing like a carefree blue-eyed girl of the South on her swing, the one strung between the Chrysler building and the Empire State. Her robes trail after her, and her crown wobbles on her head. She’s grinning. We don’t often get to see her grin, but she’s grinning. Onlookers below, standing in the avenues, gawk upward in wonder. “Look, there in the sky!” says one. “It’s a bird!” “No, it’s a plane!” says another. No, it’s our brassy lady swinging through the air and causing tall buildings to shudder with the wind trailing off her voluptuous statuesque thighs.

But, you know, Statue of Liberty has paid her dues. She did her apprentice work as an artist’s model. She had to pose for this crazy French sculptor. He was a crude bastard. He’d call her bebe, he’d call her cherie, then he’d command her to “Kick ’em off.” And she would have to lay her robe and crown alongside her recumbent torch. She would gaze at them longingly as he forced her into the most obscene poses. But she still held her pride, moving with deliberation, trying not to reveal her stretch marks (not as young as she used to be) caused by giving all those millions of births. How the poor dear shivered in that cold artist’s flat with holes in the skylight letting in the cruel winter. But she had to model. How else could she make ends meet?

Statue of Liberty was all worn out. She was exhausted. There were just so many of the poor and tired she could attend to. “How can you care for all of those yearning to breathe free?” she complained. “I’m tired of all this volunteer social work. I need a breather. And that dammed torch! I know everybody has her cross to bear, but she doesn’t have to hold it over her head twenty four

hours in the goddammed day. I think Dame Justice definitely has better duty. I’d like to buck for her job. Sure, she has to wear that silly blindfold, but she doesn’t have to hold her scales over her head like a ninny.”

Statue of Liberty made her debut. She was a silly little filly when she came out. Almost unrecognizable in her gown of white crinoline, she was so ingenue. But the gown did show that familiar empire waistline, and you could already determine that familiar strength in her body, in her form, accentuated in the face by a distinctly Grecian nose. That night, however, she was the belle of the ball. Her French origins were advertised in a cool flirtatious manner that was bien francaise. “Oh, Mr. Beauregard,” she would croon, fanning herself majestically. “Ah do believe you definitely know how to compliment a lay-dee. I definitely believe you have given my heart a pit-a-pat. What’s a girl to do with such palpitations?” After the band played Dixie, she waltzed the whole night long and wore a hole clean through her slipper.

Sadly enough, Statue of Liberty got gang banged. And the gang was the worst of their kind: Angelo “Gutsy” Fugazzi, Hideo Hakama of the Japanese Yakuza, Sid “The Yid” Gorman, and among others, Pedro Gonzales, known member of the Mexican Mafia. It was difficult finding a jurist who would try the case because of ties to members in the Senate. Lawyers for the defens
e stalled the trial date until the marks and bruises on Statue of Liberty healed, and then they cagily argued enticement. “I mean, you know, man, like there she was,” claimed Gonzales, “big and blonde.” “Yeah,” Gutsy Fugazzi explained, “we was only gonna have a little fun, ya know what I mean? And she was for it!” “Yeah, yeah,” the others assented. “Youse guys see her now, all dolled up inner robes,”Gutsy added. “But that wasn’t the way she was decked out that night when she strolled inta Mike’s Pool Hall. Youda swore she was a hooker. How was we ta know she was hoity toity?”

Finally, after much bickering among its members, Statue of Liberty received the Academy Award. Talk about your gala evenings… The whole scene on the street simmered under the glare of spotlights and neon and diamonds and shiny black limousines pulling up to disgorge the Beautiful People into a horde of screaming fans. The cops had their problems already, but they nearly went bonkers when Statue of Liberty’s entourage arrived. The moment she stepped out of that limo, it was the most police could do just to keep the crowd from tearing the robes right off her. Only the intervention of her press agent and friends kept the fans from snatching and shattering her crown into a thousand precious souvenir fragments. But the great moment came later during the ceremony when she accepted her Oscar for Best Supporting Actress. Monroe, Taylor, Hayworth: they were all sluts beside her. Her stride upon the stage was royal. Her voice, husky with emotion as she thanked her park director, her legislature, her President. When she got to thanking her mother, there wasn’t a dry eye in the house. Hell, I cried. If you were there, you would too. If you don’t think you would’ve cried… Well… Well then, fuck you! 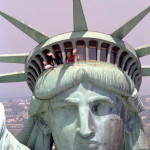 Statue of Liberty has fallen in love. Yet, it’s not the flashy love-at-first-sight bit, or any of that hokum. It speaks of a deeper, more lasting relationship built on long-term mutual acquaintance. So she has fallen in love with the Staten Island Ferry. She loves him from stem to stern, from rudder to bow. She loves the equilibrium of his decks as he strides across the waves. She loves the strong masculine timbre of his deep resounding horn. Everything about him is magical. Even the people he serves aren’t so odious. They don’t go crawling all over like insects the way her people do, up through her middle and clear to the top, where they hang like monkeys on her crown and say: “Gee whiz!” His people are beyond all that. They stand at a distance and admire her because she’s such a looker. She knows it mak

es him feel proud, too. But people can never mind their own business. All the busybodies speak condescendingly about mixed marriages. They say it won’t last. But what do they know? The canaille could never be able to estimate a love of that size. So much for your hordes! She and her lover are of the same magnificent cut— both waiting above shifting waves for The Day. She has the grandeur to hope. She possesses the scope to wait it out, breathing only for that one fateful inevitable day when he will forsake his dreadful route and stop at her dock. She’ll mount his deck, proudly, and he’ll carry her out past the tugs and garbage scows, past the skyline which has become so dreary to her. They could sail for the open sea toward a rising sun. They could even settle down in some chic hideaway like Ibiza or the Maldive Islands. Then let the rabble flock to some other place for their tourist jollies— like Jefferson’s pad or Philadelphia.